FINNEY AND THE FUNGI 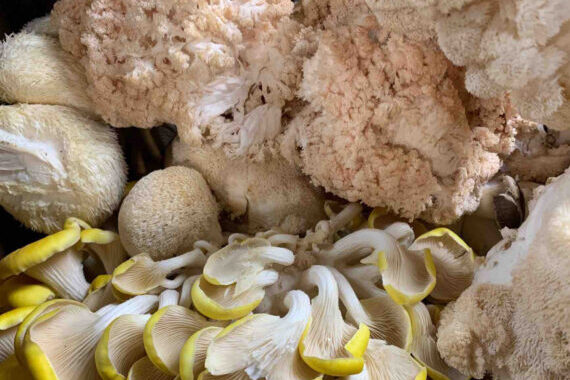 This is a story about a guy and his mushrooms. In nearby Lindstrom, MN, lives Andrew Finsness, a cheerful, creative self-starter and edible mushroom grower known to many as Finney of Finney and The Fungi. On a cold day in February, Finney shared his warmth and good humor, and the incredible tale of his fungi.

Finney’s mushroom-growing journey began in Michigan, where he was in the beer-brewing industry. “When you brew beer, you’re feeding sugar to a fungus called yeast, and you get an awesome beverage out of the deal. The process of growing mushrooms is similar to brewing beer in that, when you make mushrooms, you’re feeding wood to another kind of fungus and you get mushrooms. There’s a natural kind of symbiosis,” Finney explained in his easy-going way.

Due to health-related issues, Finney could no longer drink beer, which created an opportunity for a unique career change. “I wanted to figure out what was next for me, and I got an internship at a mushroom farm at the Detroit Mushroom Company. I worked for them for about two years to learn how to open up my own mushroom farm here in Minnesota,” he described. “I’ve always been fascinated by mushrooms as an organism: they’re not plants, and they’re not animals, so how do they grow? That really intrigues me,” Finney said with a grin.

Finney brought his mushroom passion and knowledge back to his Minnesota roots, where his surprising new fungi adventure launched. “I started growing mushrooms in my garage in November of 2020 and by January, we had more mushrooms than we could eat, so I started selling mushrooms once a week in my in-laws driveway in Edina,” Finney laughed. “I know a lot of people down there, and it’s where I grew up, so I figured ‘why not?’ We started selling to people on Facebook, and to whomever would come visit me on a cold driveway in Minnesota in January,” he joked.

With our long and cold winters, it is rare to find fresh, locally grown produce. Thanks to a small, 5ft x 11ft grow room in his 20ft x 20ft garage, Finney is able to grow mushrooms all year long. On just three rolling shelves, Finney can grow 60 to 70lbs of mushrooms a week! Not only can he produce a lot of mushrooms in such a small space, but the mushrooms grow remarkably fast. “It takes about two weeks for the colonization process and about two weeks for the fruiting process. So, from the time I start to the time I finish, I’m eating mushrooms in only a month,” Finney shared. “It’s a very quick process. Nothing else that I know of grows that quick, except maybe radishes,” he said with light-hearted humor. “It’s pretty crazy! You can literally watch them grow. From the beginning of the day to the end of the day, there’s significant growth.”

He further described the process saying, “We make a little fake log for the mushrooms in a specialized plastic bag. I mix up a hardwood fuel pellet of sawdust, soybean hulls, and water, then I add something called spawn – which is like the seeds for mushrooms, so to speak. That grows out, and once the whole bag is colonized, we cut a little hole in the bag, and we put it on the shelf in the grow room, and we watch the mushrooms grow.”

Finney’s fungi are, in one word, beautiful. With their bright colors and extraordinary textures, they look less like mushrooms and more like coral, or underwater sea creatures. Finney grows about six types of different mushrooms including Blue Oyster, King Blue, Golden Oysters, Black Pearl, Lion’s Mane, Comb Tooth, and King Trumpet. Each has its own flavor and distinctive quality. “When most people think of mushrooms, this isn’t what they think of. In terms of texture, flavor, appearance, they do look like something from outer space,” Finney said laughing. “I kind of feel like I’m walking into another planet when I’m walking into my garage.”

With such an unusual product, Finney initially questioned the success of his mushroom venture. “I wasn’t sure upon moving here what people would think about this. Most people that I’ve run into at the farmer’s markets, or who come to the booth, have never seen mushrooms like this before. They are a new thing to them,” he said. “Mushrooms are a love-hate kind of a thing for a lot of people. I’ve had a lot of people tell me they’ve only had mushrooms from a can, and they don’t like them. They’re slimy and weird,” Finney quipped with his fun and easy wit.

As it turns out, Finney’s fungi are feeding a niche no one anticipated. “Many customers come up and ask ‘What are these? Are these real?’ Not even ‘Are they edible’ but ‘are they real?’ It’s a common question!” he laughed. “So to go from that, to the next week having people try them, and then to have them become weekly customers … it’s been just heart-warming and really great! I’ve been absolutely blown away by the response we’ve gotten in our community,” Finney exclaimed. “I love sharing with people, I love introducing people to something new. To see someone try something they otherwise didn’t like, and have them enjoy it, is so rewarding! To engage in that experience is so worthwhile.”

Finney shares his love of mushrooms with such ease and enthusiasm. He has also has a deep respect for the mushrooms he grows. While describing how he came up with the business name Finney and The Fungi, he said “Originally, I was going to be Finney’s Fungi. I even got the website and everything…but, I kept hanging out with these mushrooms, and they kept telling me ‘What? You think we belong to you? You think this is your show, man? This is an equal partnership here. You can’t do it without us, and we can’t do it without you.’ And so the name Finney and The Fungi came to be.” This has been a mutually beneficial relationship in which both Finney and his mushrooms thrive. Finney speaks of his mushrooms as friends. “Every time I open up the tent in my garage, I’m excited to get to hang out them,” he said genuinely.

The Watershed Café is proud to partner with Finney and The Fungi. These incredible, fresh, locally grown mushrooms are found in many of our specials and dinner fare. In years past, you could find Finney and The Fungi at nearby farmer’s markets including Lindstrom, Chisago Lakes, Forest Lake, and Franconia. For more on where to find Finney and The Fungi this year, visit his Instagram page at https://www.instagram.com/finneyandthefungi/ or his Facebook page at https://www.facebook.com/Finney-and-The-Fungi-100378358653336/. He can also be reached by phone at (218) 234-9186.